CLOSE MENU
HomeDiscovering a Sense of Belonging and Worth

Michael moved with his family to the United States from Great Britain when he was 13 years old. The family relocated to Boston because Michael had been the subject of what his mother described as “very bad bullying” at three different schools. In her letter of gratitude she goes on to say, “due to his school life, [Michael] was walking away from Christian Science disheartened; this was a very low point in his young life. He had lost an enormous amount of confidence and in desperation we decided to try something totally new and applied for visas to come to the States.”

Seeking friendship and peace for Michael, his mother, Bronwen, says they found it immediately in DiscoveryBound Outreach activities. “I can’t even begin to tell you what this meant to both my son and to us as a family to have him and my daughter welcomed, enfolded and accepted immediately,” she says. “To be able to instantly connect with children and young adults who think the same, have the same code of behavior and outlook in life, was, to say the least, incredible.”

Michael’s experience with DiscoveryBound events led him to apply to and be accepted into the National Leadership Council and eventually attend the A/U Ranches both as a camper and a counselor-in-training. 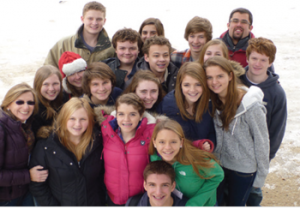 What follows is Michael’s account of how his involvement in DiscoveryBound’s National Leadership Council changed his life (adapted from a letter he wrote to his NLC classmates):

I’m told I’ve had a very interesting life. I have lived many places, been to many schools, visited a large portion of the world and missed few opportunities presented to me. I often ponder on the idea of soul, and the idea of what it is that makes each one of us different to another, and I have come to the conclusion that we are shaped by our experiences. Everything that we have experienced, the good and the bad, is what has made us into who we are today. I have done a lot in life, but when it comes to influencing me to be a better leader, a better person, nothing has been even slightly as influential in my life as this incredible program.

Growing up in England was never easy. I went a lot of places, and I met a lot of people, but I never fit in. There was always something wrong with me. At the age of 12, I had never had a friend.

I was in America for about a month when my mother strongly encouraged me to fill out the longest application I would ever have to write for some weird leadership program that meets every year in the middle of nowhere. I can’t believe I’m saying this, but I was so wrong. (Thank you so much, Mum—you were right.) 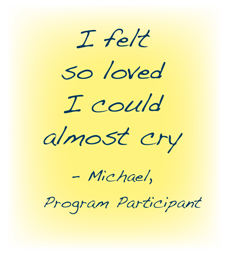 But how could I know what was waiting for me? Never in my life had I felt something remotely close to the love that I was about to walk into. To this day, Baggage Claim 19 at Denver International Airport, where I arrived for my first All Class Retreat, must still radiate with that unconditional affection that everyone there expressed to everyone else around them—even the small, plump and very attention-seeking stranger with a British accent. I felt so loved I could almost cry.

By the time I left Denver, I knew already that I had met the most incredible group of friends I could ask for. What I didn’t realize is that today, four years later and older, they are no longer my friends. They are my family.

I said earlier that nothing has changed me as much as this program has, and I didn’t lie; but before the leadership seminars and the monthly assignments and the experiences all over the world, it is my NLC family that has made me who I am today, and I honestly don’t know where I would be without them. They will forever be in my heart… because the love they showed me is the love I had been searching for my entire life. It’s been an incredible four years, and although it’s not over, I thank everyone for every second of it.

Michael’s mother is deeply grateful that Michael has a support group of peers helping him make the right choices. “DiscoveryBound gave to him what we could not—belief in himself and the knowledge that he was a good person who deserved to have friends, that it was not him that was the problem, but the environments that he was in,” Bronwen says.

In fact, she adds, Michael’s sister, Catie, who had been happy in the UK and had her world turned upside down when they moved, emerged from her first DiscoveryBound event saying, “I now feel that this is the right place for me to be, too.” As the truth behind the words, “whatever blesses one, blesses all,” is demonstrated, Catie has also been blessed by her participation in DB, as well as by her time as a camper at the A/U Ranches and in NLC.

“DiscoveryBound gives the kids a chance to be the person they wish to be,” Bronwen says, “to live the life they wish to live, with the knowledge that this is right and true and that they are not the only ones who wish to live and express themselves this way.”