“Most of my life, I didn’t really know anyone else that was my age who was also a Christian Scientist.”

Stella found peers who practice Christian Science, first at her school (Principia) in 2019 and then in the DiscoveryBound National Leadership Council (NLC), which she joined as an 8th-grader the following year.

“Being a part of NLC was a chance for me to meet more kids like me, in a new and different way,” Stella says.

Her NLC class (2025U) started its program in January 2021 at a virtual All Class Retreat, followed by monthly Zoom meetings. “It wasn’t really until we all met up in Colorado at [the A/U Ranches that] we really got to know each other,” Stella recalls. “It felt great to meet other kids my age who knew about and understood Christian Science.”

During her class’s two-week orientation summer program at the A/U Ranches, Stella found a community that she related to, both in her classmates as well as in her class leaders and the support staff.

“I loved being together with my new friends, but what I really enjoyed was the connection I felt with the counselors,” Stella says. “The challenges that we went through were tough, and being away from my family was hard, but they helped me in a way that only people who know Christian Science could help me.” 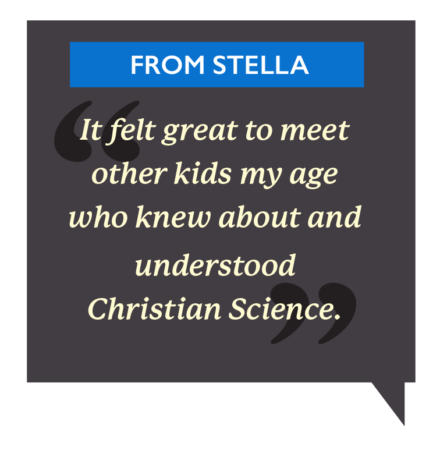 The practice of Christian Science is a part of every NLC activity. During their orientation summer, the teens participated in daily Bible Lesson study, they sang hymns and classmates were appointed to be practitioner of the day. Stella’s class also talked about what they were grateful for.

“Thinking about gratitude with our friends made us appreciate each other and the opportunities we were given,” she says. Part of that, she adds, was “keeping my mind open to knowing there were things we could be grateful for – even different things that may have been upsetting or scary. You can think of your cup as half full or half empty or you could be grateful for even having a cup to start off with. So even when I did go through some scary situations, I grew so much from them.”

As with all NLC class trips, orientation summer is designed to help nurture the teens and provide an opportunity to discuss the NLC curriculum, as well as give them hands-on experience at leading, praying and building community. Because of this, there are a number of opportunities for overcoming challenges and growing spiritually.

For instance, when the class hiked to the Lost Wonder Hut (a cabin off camp property) carrying large backpacks, it was raining and pretty cold, Stella recalls. “The counselors knew how to encourage us every step of the way,” she says, adding that they also “helped every single camper through any struggle… by sharing quotes, stories of healings they may have had, and making sure we knew that they were here to support us.”

Those staff members also helped Stella when she fell out of a raft while going through rapids on the Arkansas River, hitting a rock and getting a bit scraped up. “I remember… being terrified, but as soon as I was back in, I already felt the support and was told by both of my class leaders that they were thinking of me and how loved I was.” She was “all fine after a couple of days,” she says.

Your support of the DB National Leadership Council helps bring opportunities for connection with supportive peers and spiritual growth to high school students. Thank you!