CLOSE MENU
HomeFINDING HER PLACE IN A LOVING, SUPPORTIVE AND JUDGMENT-FREE ENVIRONMENT 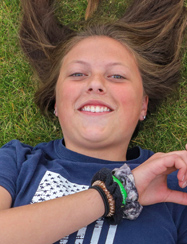 When first joining DiscoveryBound’s National Leadership Council (NLC), Mia wanted to be in the program because she is the only Sunday School student at her church. Known as shy, she sought out a way to learn how to be more outgoing and a servant leader.

Prior to her engagement with the program, Mia had a small understanding of what NLC had to offer. “Honestly, I thought that NLC was just going to be a program where you have a call every third Sunday of the month and get a bunch of assignments,” she says, “but when you join NLC, it’s like NLC is your family.”

Mia’s participation in the NLC program means a lot to her. It started in her 8th grade year – a year in school she says was “traumatizing.”

“To be able to join NLC and be a part of a family who really cares was surprising – it was like, ‘Whoa, this is what true friends are really like.’” She describes the people she is surrounded with in her class as “loving and supportive” and that “there’s no judgment at all.”

Before arriving at the A/U Ranches for the two-week NLC orientation summer, Mia had injured her knee and could not walk or run normally. She arrived at camp feeling afraid and thinking she wouldn’t be able to hike. But she found this to be quickly addressed by her NLC classmates and class leaders, who assured her she was a perfect child of God.

Trevor Snorek-Yates, one of her two NLC 2023S class leaders, says Mia came to orientation summer wearing a knee brace. He and Sue Luther, the other 2023S class leader, discussed the brace with each other, and then Sue spoke with Mia about it the first night.

“The next morning I read two [Christian Science] Sentinel articles – one about a knee injury and another about addressing ‘what problem are we trying to solve?’” says Trevor. “It led me to consider, is it a knee problem or a thought problem? The two articles cleared my thought.”

“My class leaders gave me some [Christian Science] articles about different injuries,” Mia recalls. “Eventually I ended up realizing that mortal mind is just encouraging you that you’re injured and you just have to realize that you’re not really injured, it’s just mortal mind. I ended up being healed the next day. It was just a really cool experience.”

Trevor witnessed the healing. “Mia woke the next morning and began to haul logs as part of a service project at the Lost Wonder Hut,” he says. “She was halfway through before she realized she forgot to put on her knee brace and her leg felt perfectly fine.”

Mia was then able to fully participate in the rest of the program. “The activities we do are not only really fun but just a great way to learn how to be a leader and a great bonding experience,” she says.

Only one year into the program, Mia has found true friends, deepened her understanding of Christian Science, and strengthened her leadership skills. Her gratitude for what the NLC program has given her already is profound, and she sees it impacting her beyond high school.

“Once you get out of high school, I know a lot of people say, ‘You’re in the real world, you have to be an adult now,’ and NLC has a big impact on that,” Mia says. “It is preparing you for the real world, and not only are you prepared, but you have a family by your side.”