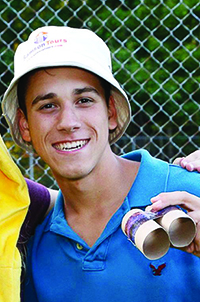 When Noel attended his first DiscoveryBound Outreach event, he was coming off a rough year. He had been in a skateboard accident the summer before 8th grade that landed him in the hospital for a week. His friends had started drinking and using marijuana, leading to his isolation when he refused. And at school, his grades collapsed.

Noel made progress in the hospital that was quicker than expected, but he was still facing the effects of head trauma. He needed extra help with his school work and was experiencing depression.

His mom, Cynthia, recalls a significant moment of inspiration. “While praying one day, the thought occurred to me to handle the influence of drugs,” she says. “Noel had been on morphine at the hospital, and I handled the belief that there could be any kind of influence or belief of withdrawal on his true, pure identity that could result in depression.”

In turning to God and attending Sunday School, Noel found he was yearning for a new, supportive community of friends – those who shared his values and interests. He learned about DiscoveryBound Outreach from his Sunday School teacher and, encouraged by his Sunday School classmates, he started attending local and regional weekend events. 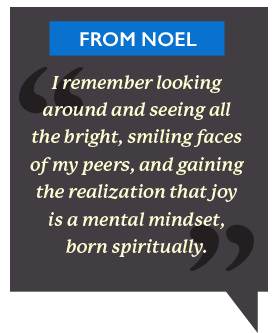 “This helped me focus on someone other than myself, which contributed to my inner struggle against depression,” Noel says. “I remember looking around and seeing all the bright, smiling faces of my peers, and gaining the realization that joy is a mental mindset, born spiritually.”

Lori Selby, the eastern regional manager for DB Outreach, met Noel during his first weekend event at Crystal Lake Camps in the fall of his freshman year. “He was so quiet at first, but by the end of the weekend he was just beaming,” she says. “I’ll never forget that. He was immersed in love and support from everyone. It was great to witness the transformation of joy he expressed throughout the weekend.”

Noel’s dad, Jeff, who does not practice Christian Science, also noticed the change in his son. “He returned from that retreat with new and deeper friendships and renewed optimism,” he says. “His CS friends embraced him with enthusiasm and truly cared about his well-being, on many levels. The DB Outreach friendships and experiences renewed his spirit, confidence and willingness to trust.”

Noel appreciated the physical and mental stimulation provided at the Crystal Lake Camps weekend, and eventually felt he could challenge himself with a “Leap of Faith” on the ropes course. The leap he made at this event led to many others in the Northeast, including an overnight New Year’s Eve Owl Howl and a winter weekend in New Hampshire. “He was a bright light with a huge smile every time he attended,” Lori says. 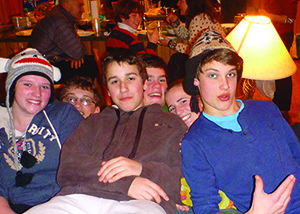 “These events filled what had been lonely weekend experiences with friendship, healthy thoughts and wholesome activities – so needed for youth today,” Cynthia says. “DB Outreach seemed to prepare Noel for new opportunities in leadership, teamwork, academic excellence and greater spiritual understanding. Not only was it fun, it was formative in bringing out natural self-respect, respect for others, confidence and other wonderful qualities that are clearly part of his identity today. It helped to remove the ‘cool’ mask and expose the real Noel – a happy, loving, free, adventurous and generous young man who is a joy to be around.”

As Noel discovered his true self, he found healing and opportunities, including entering Principia Upper School as a sophomore. Cynthia recalls, “The struggles with his memory and school work fell away, and he discovered a new aptitude for math that put him near the top of the class.” And, to complete the healing, Noel adds, “I was finally released from the depression that I thought had become a part of my identity.”

In the end, he says, it was love that made the difference. “DiscoveryBound certainly showed me great love, healing not only a physical injury, but also shaping my character in a positive way.”