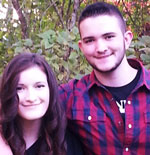 At a DiscoveryBound (DB) Outreach Winter Weekend in New Hampshire a few years ago, Ben and his sister, Jessica, didn’t know anyone. They had never participated in a DB event. They didn’t know how to ski. But the moment they arrived, they were eagerly welcomed by a swarm of other teens.

“The second I met up with the group, I felt so much love and acceptance,” Ben says. “It was my first time skiing and I was a little nervous. I started out with the bunny slope, and at the end of the day I was skiing down the mountain on the blue runs! I felt like I could do anything in the atmosphere DiscoveryBound created.” 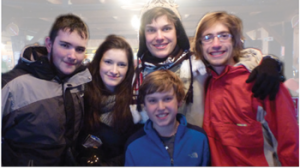 Buoyed by this experience, Ben participated in other DB activities he’d never tried before, including rock climbing, a national New York City Focus on the Arts weekend, a service project involving raking leaves at the Chestnut Hill Benevolent Association, and playing dodge ball with many new friends at a trampoline park. “Through all those events, I continued to grow and learn about being a Christian Scientist in ways that put into practice what I was learning in Sunday School,” Ben says.

Lori Selby, DB Outreach’s Eastern Regional Manager, witnessed firsthand the friendships Ben and Jessica forged and their smiling faces as they shared gratitude with the group. She also learned of Ben’s interest in mountain biking and thought he might enjoy that program at the A/U Ranches. On Lori’s recommendation, Ben attended an A/U Ranches Camp Show. That next summer, he was headed to Buena Vista, CO.

“I had a lot of concerns about the trip because I had never flown in an airplane before, never been away from my family for more than three days, and I was going to fly by myself and stay at a camp I had never been to—for two weeks,” Ben says. And although he found old and new friends when he first arrived, he adds, “I became very homesick. But on the third day at the A/U Ranches, everything changed. I realized I wasn’t homesick, because I was with my other family at another home. I started to receive and express that love I knew very well from DiscoveryBound, and became completely filled with joy.”

Ben’s search for answers to his questions about Christian Science burst wide open during a quiet hour after a four-day mountain biking trip to Crested Butte. “I realized that I believe in Christian Science, but I didn’t have a solid reason to believe in it,” he says. “I needed a sign—something to show me that Christian Science was real and what people say about healings is true.” 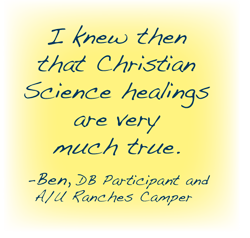 The next day, while riding a mountain bike on a jumps course near the camp, Ben crashed and fell face first off one of the jumps, slamming his head against the dirt. He was taken to the camp practitioner. “I talked to her, and immediately, the pounding headache I had after the crash started to disappear,” he says. “This pain that was making me sick and putting me in extreme discomfort was being lifted from my head, just by realizing that it was not who I was. My scrapes were patched up and I continued with my day feeling perfect.”

The next morning Ben woke up to find his eye nearly swollen shut and painful. “I was looking forward to riding with the mountain biking group up at Monarch Crest, and I wasn’t going to let this eye get in the way,” he says. “I talked to the practitioner again and she helped me realize that I was not swollen with blood and pain, but swollen with gratitude and joy for the trails I would ride that day. I was inspired by that and kept that with me the rest of the day.”

Ben completed the ride without distraction from the eye and even peaked Mount Yale the following day. “After that, I enjoyed the rest of my time at camp without having any issues with my past injury,” he says. “I then knew that Christian Science healings are very much true.”

Bill and Anne, Ben and Jessica’s parents, recognize that the summer Ben spent at the A/U Ranches was transformational. “This [healing] was life-changing for Ben,” says Bill. He adds that Ben and Jessica loved their Sunday School, but often they were the only ones in their class. Spending time in a loving and supportive environment and being able to discuss ideas about Christian Science with their peers has enriched their lives, Bill says.

“My experience at the A/U Ranches and all my amazing experiences at DiscoveryBound have made me who I am today,” says Ben. “They’ve helped make me be a good person out in the world, expressing love and joy with others.”