CLOSE MENU
HomeLOVED AND SUPPORTED AS A TEEN AND ADULT 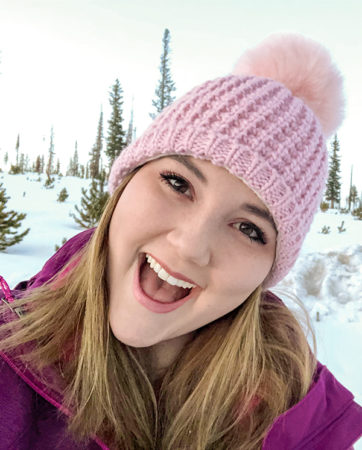 Amanda Loudon had gone to camp and was active in her local DiscoveryBound (DB) Outreach chapter, but it wasn’t until she attended her first National weekend event with DB Outreach in 2009 – Focus on Entertainment in Los Angeles – that she was hooked.

“A wide-eyed 8th-grader, I was blown away by how many Christian Scientists there were from all over the country who had the same questions as me and desire to learn more about CS,” Amanda says. “That weekend was also my first time hearing about DB’s National Leadership Council (NLC), which was invaluable to my high school experience.”

She attended five more National weekends, held in Houston, Seattle, Boston, New York City and at Principia College. “Every single event contributed to my spiritual growth,” Amanda says. “These events allowed me to ask my peers questions about Christian Science that I was wrestling with, providing me with a perspective different from a Sunday School teacher or practitioner, and broadening my scope and understanding of CS.”

Like so many young people, Amanda needed a strong community as a teen. She found it in DiscoveryBound. “I went through several really challenging things during high school, and because of the friendships made and things learned was able to get through them,” she recalls. “They shaped my practice and encouraged me to ask more questions, deepening my relationship with Love.”

Now, she adds, “I so look forward to being able to chaperone as a way to give back and stand witness to the same growth in others that I experienced. I’m still learning, as we all are, but I owe so much of who I am to DiscoveryBound.”

A recent graduate of Principia College, Amanda has found herself, for the first time ever, in the position needing to work to create a CS environment for herself. Though it was tough at first, it instilled a desire to practice Christian Science more than ever, she says.

“While I attended Sunday School most every Sunday growing up, church often held a sense of obligation for me,” she says. “I went because my dad went, and if he was out of town for work I often would not go. Now that I’m living on my own, I look forward to hopping on the L [train] to head downtown for church. It’s an opportunity to commune in Christian Science and meet new people. I read the Bible Lesson now, more than I ever did, and I reach out to people more often when I’m wrestling with something as opposed to thinking about it independently. Creating this community for myself has become a necessity!”

A recent fulfilling way Amanda found to connect with her CS DiscoveryBound community was to attend a DB 20s/30s weekend in New Hampshire in January. “What was most inspiring to me was the sense of authenticity surrounding the weekend,” she recalls. “There was an even bigger age gap at this event than I was used to at the teen events, but because of that I was able to meet even more people and rekindle friendships with several people I hadn’t seen in over 10 years. While I so value the friendships I have with non-Christian Scientists because different perspectives are so valuable, there are few things more uplifting than being in a group of people who understand Love the same way you do.”

The uplifting environment of this group helped Amanda turn to God when she fell on an icy patch while skiing, hitting her helmet and jamming her goggles into her eye. “Given that my mom is not a Christian Scientist, I have been exposed to a non-Christian Scientist approach to healing throughout my entire life,” Amanda explains. “I often have to handle the temptation of dealing with a claim ‘quickly’ by turning to matter instead of metaphysics, but when I’m in an environment like the one in New Hampshire, that desire disappears.”

She immediately began to pray. “I actively denied that anything could be less than perfect,” Amanda says. “The two who were with me skied over and helped me up, making sure I was A-Okay, and we skied down to meet the rest of the group. I was in no way limited despite a claim that attempted to say otherwise.

“I love this type of community because it proves to me that I am so capable of practicing Christian Science in the way that I want to,” Amanda continues. “I cannot wait to attend more of these events going forward and hope to be able to lead local ones here in Chicago.”

Interests: Traveling with family, painting, theatre, scuba diving, the ocean. Amanda is working on a master’s degree in math and hopes to be a high school math teacher.