After learning that a school of 500 students had zero books, Wyatt was determined to help.

Zangama Secondary School in Murambinda, Zimbabwe, has been receiving books from Wyatt, a DiscoveryBound National Leadership Council (NLC) student, for the past three years. A once-empty library sitting in the back of the principal’s office now takes up an entire classroom.

As a part of the NLC program, students work toward a Congressional Award through voluntary service. Wyatt’s goal was to attain the Gold Medal, which requires 400 hours of service. In May 2017, his first year in NLC, he called a family friend who was running a nonprofit organization for Zambia and Zimbabwe and was directed to Zangama’s 9th- and 10th-grade English language teacher, Robert Simbini, to learn what they needed.

Mr. Simbini told Wyatt that fluency is required of his students by the time they graduate (since it’s Zimbabwe’s national language), but that they had no reading materials. “It blew my mind,” Wyatt says. “So I started sending them books.” 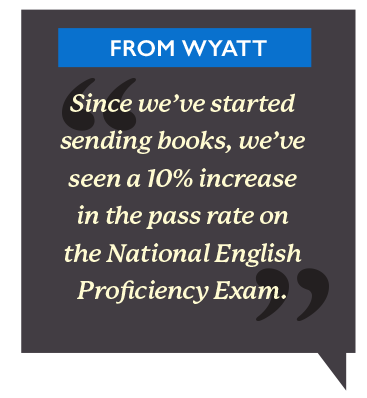 He committed to raising funds for and selecting literature to send to the school. In December 2017, he sent his first shipment of 150 titles. In return, he received 150 handwritten thank you letters from the students.

Since then, his self-started nonprofit organization, Books 4 Zimbabwe, has delivered more than 1,500 books, with 160 series sent and $4,500 raised.


The students’ favorite books are The Hardy Boys and The Wizard of Oz. In addition, Wyatt sends books that are culturally appropriate for Zimbabwean students. The library often has no books in it because they’re all checked out, including by other area schools and community members.

“Since we’ve started sending books, we’ve seen a 10% increase in the pass rate on the National English Proficiency Exam,” Wyatt says. “Ten percent of them couldn’t read a paragraph before, and now they can. That’s 50 new kids who passed this exam! In Zimbabwe, if you fail one of your exams, you’re not promoted to the next grade level, which often results in dropping out of school. So this means they end up going to school longer.”