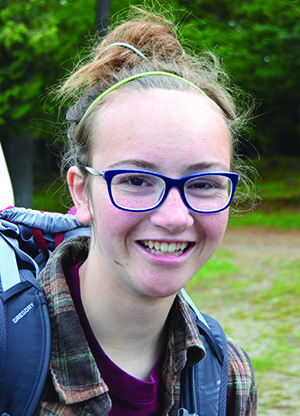 Each class in the National Leadership Council goes on an adventure trip in the second year of the program. This two-week trip, mostly outdoors in an environment unfamiliar to the teens, is designed to strengthen each student’s trust in God individually and as part of a supportive group.

Corrina saw how that trust results in healing when she and her NLC class canoed through Maine during their adventure trip last summer. While loading a canoe onto a trailer, she fell and twisted her ankle. One of her class leaders, AmiLynne, quickly came to help. “She lost no time in assuring me that I could not be hurt, not in this environment of Love, not ever,” Corrina says.

The teen spent some time in her tent, studying that week’s Bible lesson, while AmiLynne and her co-class leader, Steve, checked on her periodically. Corrina decided to rejoin her class after a while rather than allow the injury to interfere with the activities, but she struggled with a sense of helplessness.

“I went to bed that night feeling utterly useless,” she recalls. “This was by far the most frustrating part for me. I pride myself on being a fairly independent person, and hardly being able to walk for even an evening turned this on its head.”

In the morning, Corrina and the rest of the class learned that the day’s adventure would involve a hike up Big Spencer Mountain. Although she was a strong hiker, she felt apprehensive about making the trek on her injured ankle. Steve took Corrina’s backpack and supported her with an idea that he says has helped him while running. “I think about each step as an opportunity to squash or smash the erroneous belief,” he says. “With each step, one stands more firmly on Truth.” 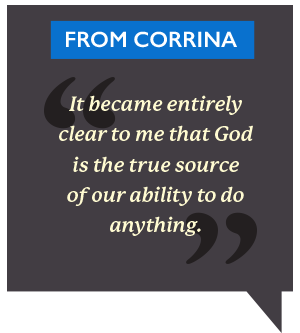 Corrina also found inspiration as she prepared for the journey. “I had been working with the idea that by letting matter sway me, I was letting in the idea that God could be swayed,” she says. “When looking at it this way, I realized how ridiculous the mortal idea was that there was something wrong with me.”

She started the hike slowly at the back of the group, with two classmates staying with her and AmiLynne bringing up the rear as the sweep. “Knowing I must first – and only – handle my own thought,” AmiLynne says, “and quite honestly a bit challenged with the hike myself, I began to counter each thought with a spiritual idea.”

After a steep ascent, the group reversed its direction and headed down the mountain. Because of the narrow path, there wasn’t room for Corrina to move to the back, but she didn’t even consider doing it. She just turned around and started walking. And for each step, instead of saying, “ouch,” she replaced it with the statement, “There is no sensation in matter” (Science and Health with Key to the Scriptures, Mary Baker Eddy, p. 237).

“By immediately replacing mortal thought with Truth, I was no longer letting these thoughts of helplessness and uselessness even present themselves to me,” Corrina says. 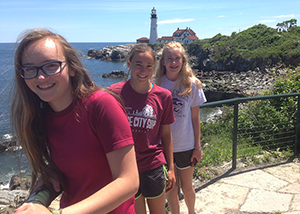 After a break they continued down the mountain, with Corrina at the front again, but this time it wasn’t because there was no room for others to go around her. “I was perfectly able to keep that pace,” she says. “My ankle no longer bothered me, and by the next night I could no longer remember which one I had supposedly hurt.”

Steve felt a shift in his thought even before he saw the change in her. “As the hike progressed and got steeper, any sense of worry or concern in my own thought about Corrina dissipated,” he recalls. “She put her trust in God, and I knew that her faith in God results in demonstration. And sure enough, she was healed.”

The healing ripples from this experience blessed AmiLynne, who felt her own struggle on that hike diminish and also saw Corrina help her classmates later in the trip during a challenging stretch of paddling. “She continued to share uplifting thoughts, shouting from canoe to canoe to encourage her classmates,” AmiLynne says. “Her healing was now being expressed by knowing that same Truth for those around her.”

While she’s grateful that her ankle was healed, Corrina says the most significant growth came from overcoming the sense of helplessness. “I realized that I never depend on myself and only myself,” she explains. “It became entirely clear to me that God is the true source of our ability to
do anything.”

“It was a wonderful reminder that God is a very present help in trouble, accessible at all times and in all ways,” Steve says. “Sometimes we have to climb mountains, where we’re forced to lean on God.”